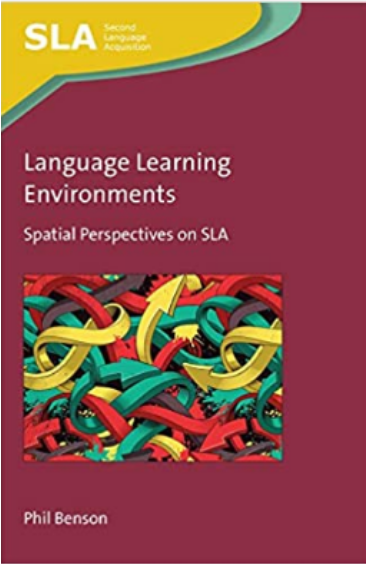 The book is slender and with only six chapters in the table of contents, it could be assumed that the author attends to the content superficially and that it is a brief discussion of spatial dimensions regarding SLA. It is far from that. It is a book that has been jammed full of content from theory to application into one short volume that both informs readers and provokes thoughtful reflection based on experience/s with the content discussed.The first chapter first provides a brief history of the shift within SLA from a focus on form and to an inquiry into the process, and as result, the context in which learning occurs became of interest. Benson gives an examination of where SLA became increasingly more important with the presence of globalization and the ease of people’s mobility. Immigration, overseas education, and international travel set the ground for a surge in second language teaching across all sectors of domestic and international economies. This has led to an examination of multilingualism, which encompassed intercultural competencies. Then, the author underscores that the differences of the impact of globalization on language learning are well studied, but an understanding of second language learning (SLL) on globalization is not yet well examined. In particular, the globalization of SLL correlates to the glocalization of SLA studies. The increase of diversity has prompted a move away from attempting to find universal commonalities, but one that is focused on the local context to inform SLL and teaching. The book therefore aims to explore the literature with respect to spatial aspects of SLL and SLA research. The chapter closes with an outline of the book’s content and key terms.

With the rationale for the book established, chapter two explores the context of SLL learning and theories of space (i.e. context). The pivot to the social dimensions of SLL had two important outcomes. One was that SLL not only is context based but is a social process. The other was established as a cross-disciplinary research approach. The author next provides a brief history of critical spatial theory and how it is distinct from other related terms and areas of work in SLL contexts. Reasoning why spatial contexts are important is framed by prominent literature on concepts such as the view on space in early civilizations, modern 19th and 20th century understanding to establish a theoretical developmental flow and commonalities. Yet the takeaway is that “[….] space matters, not just as an interesting but neglected dimension of the social world” (p. 18). Consequently, the use of and filling of space is a complex interaction of the past and the present, with insight into how and why events and uses of spaces have occurred. Therefore, the chapter next examines different understanding of space, the physical space and the influence on social relations, social divisions and relations as a production of space and its fragmentations, and the place as a social construction, with other sub-views of space establishment. The chapter is an overview of theoretical perspectives and is not meant to be exhaustive, but it does provide an insightful overview of these theories and how they were conceived. Regarding SLL, the author reminds readers that in his view the globalization in the early 2000s has most of all shaped spaces of language learning. These spaces are where negotiation of multilingual learners and speakers are part of the construction of global space.

With the theoretical foundations established, chapter three shifts to examine the spatiality of language learning and linguistics.  The author states up front that the chapter discussion is founded on the notion “[….] there is no empty space, space is often produced in the page of empty space”, not is space organized in an orderly format as it reflects complex human past and present interactions and established processes and tangible manifestations. Therefore, there is a look back on the discipline of linguistics and the established place for it in history, highlighting a disciplinary space is also a physical space that has been established in academia with interaction from a variety of professional fields. With that, a historical summary of space and language is presented with respect to theoretical framework and tangible examples of linguistics and the spatiality of language. The author highlights at the end of the chapter that “Language is not a physical object in motion in empty space, but linguistics conceptualized language as if it were such an object” (p. 63). For the author this means language is produced for ideas, values and ideology as a single object and is present in physical and disciplinary contexts and is structured and informed by the space in which it is used and informed.

In the next chapter, the author postulates that languages are always inserted in specific social and physical environments. To support this idea, he conceives the notion of language bearing assemblage, which describes the notion, the script, and the object a word refers to that are carried by societies, goods, and information.

Then, Benson turns his attention to the fact that words are transported around within a nation’s boundaries but also into the rest of the world. The result is the mobility of language-bearing assemblages: “The mobility of people, in other words, puts language into motion. (p.81) In this world, languages are learned when learners and languages collide. In the author’s view, there is a direct correlation between social assemblages, such as communities or states, and the language space they produce, ergo, their territorial attribute. However, with a number of examples, the author points at the multidirectional nature of languages that tend to travel beyond boundaries and reiterates the global flow of people as causations for global mobility of languages.

In chapter five, Benson introduces the topic of spatiality of language learning environments, as spaces where learners come into contact with language-bearing assemblages. After outlining the variety of languages spoken in many international cities, the author sees fascinating potential in those environments to become arenas for learners to acquire not one, but an assortment of languages. Then the author shifts to the individuals, the language learners, and their interactions with their learning environments. Here in the book, we find one of the rare tips for the classroom application that language instruction must enable learners “to transform the spaces of the wider environment into settings for learning and assemble them into coherent language learning environments that are adaptive to their interests and needs” (114).
In the last chapter, readers are provided with academic resources on spatial research in second language acquisition. The author persuades his audience for the need to continue researching spatial theories beyond the framework he has conceived and proposed in his book. Sociolinguistics and its role in the language learning space, formal and informal language learning settings, including online multi-player role-play games, and the interaction between language learners and their environmental resources are the focus of the first half of chapter six. The second part of the chapter is then dedicated to “research agendas”, where the author not only suggests four potential research topics on Second Language Acquisition and language learning environments (settings and environments, individuals in settings, individual environments, designed-based research), but he also directs the reader who might be interested in following the author’s steps, towards less-used, but useful, research methods such as observation and visual methods.
At the beginning of each chapter, under the title, before the beginning of the first paragraph is a quote from a notable individual (e.g. Saussure, Lefebvre) that draws the reader in and positions their mindset for the coming content in the chapter. The interaction of these initial quotes with the chapter discussions places the content addressed at the theoretical, research, practical SLL and individual reader experience levels. The reader can then make personal connections to the chapter content.
Site Map   Contact Us