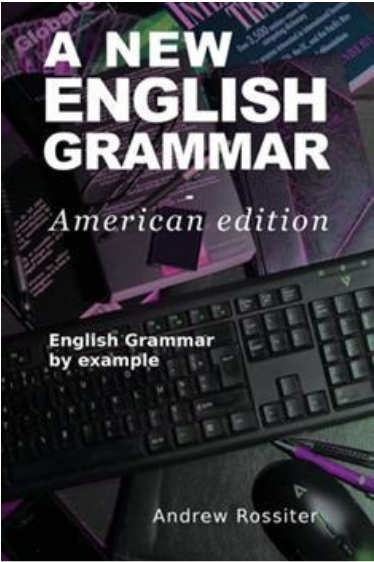 Utilizing a form-meaning-function (FMF) approach to language learning is important because “grammar is not merely a collection of forms but rather involves the three dimensions of (morpho)syntax, semantics, and pragmatics. Grammatical structures not only have a morphosyntactic form, they are also used to express meaning (semantics) in context-appropriate use (pragmatics)” (Celce-Murcia & Larsen-Freeman, 1999, p. 109). The reference book, A New English Grammar: American Edition, by Andrew Rossiter contains the elements of such a tri-dimensional approach to learning English grammar. This book is made up of four chapters that are entitled “Verbs,” “The Noun Phrase,” “Other Parts of Speech,” and “Sentences and Clauses.” This reference book is organized somewhat differently than most English as a Second Language (ESL) textbooks, but will work well as a companion to most textbooks designed to teach American English grammar.The first chapter, “Verbs,” contains a significant amount of information about verbs. This information includes a definition of verbs and detailed descriptions of verb tenses. Instead of treating verb tenses and verb forms separately, this chapter combines them as, according to Rossiter (2021), verb forms are an “artificial construct” that “can be very confusing for students” (p. 6). In addition to verb modality and verb moods, this chapter includes discussions of modal verbs, conditional verbs, auxiliary verbs, and phrasal and prepositional verbs.
Similarly, the second chapter, “The Noun Phrase,” consists of an impressive amount of information about nouns in reference form. A definition of nouns and noun classifications is provided. Unlike many English grammar books, this chapter discusses the gender (masculine, feminine and neutral) of nouns before presenting information and examples about articles, pronouns and possessives. This chapter also provides rules and exceptions concerning singular and plural nouns, collective nouns, noun forms, and noun modifiers. Important attention is paid to noun usage, pronouns, and relative pronouns, adjectives, and adverbs. While interrogative pronouns are not addressed in this chapter, there is a reference to the place in the fourth chapter where they are discussed in more detail. A substantial portion of the chapter is used to present information about demonstrative pronouns and adjectives, quantifiers, and articles. Details about numbers: cardinal, ordinal, fractions and decimals are included in this chapter. Discussions about possession and adjectives round out the chapter. Readers will be pleased to find that there are more examples of each grammar element than in the first chapter and more of a focus on usage.
The third chapter, “Other Parts of Speech,” encompasses adverbs, prepositions, conjunctions and connectors. This chapter is shorter than the first two but has similar attention to definitions and examples. There are important differences between adjectives and adverbs discussed. In addition, important details about the different types of prepositions are presented in both table and text formats. This chapter pays particular attention to form, meaning and usage of conjunctions and connector words. As in the other chapters, readers will appreciate the referral to the different sections where each grammar element is presented.
The fourth chapter, “Sentences and Clauses,” completes this concise and useful reference book about American English grammar. The color coding used in the other three chapters to emphasize the different key topics and parts of grammar is even more significant in this chapter due to its discussion of word order in sentences and clauses. The chapter addresses not only the different parts of a sentence sufficiently, it also presents important information about different types of questions. The form, meaning and usage of both affirmative and negative sentences and questions is included. The chapter revisits the negative forms of verbs and adds details on how to negate quantifiers, nouns, and pronouns, in addition to negation in relation to adverb phrases, adjectives, and tag questions. In addition to relative clauses and other complex sentence forms, information about punctuation and style (both spoken and written) is presented.
In addition to these four chapters, the book is completed by a glossary of grammar terms and an appendix related to common consecutive verbs. This book will be most helpful to college-level and adult learners of English as a foreign language. The chapters employ technical grammar terms that students with beginning levels of English proficiency would be challenged by. Nevertheless, the book will make for a significant and appreciated companion to the majority of ESL textbooks or American English grammar books for students involved in the complexities of learning English as their second, third or fourth language.